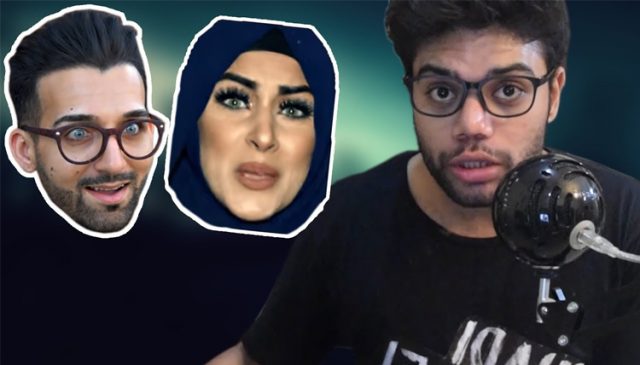 If your’e a Pakistani and a regular on YouTube you might have come across names such as Zaid Ali T, Furqan Shaykh & later on Shaam Idress and company making appearances on our timelines and watch history. Operating from overseas, they have managed to create a hefty following online due to their videos primarily based on life as a desi person in a foreign country.

While most of their videos provide embarrassingly accurate and relatable moments to enjoy, the competition is indeed getting more challenging. Just like any other online platform, YouTube is not far behind in it’s fair share of drama and controversy and just recently it has boiled over in the feud between a Youtuber Shaam Idress and Ducky Bhai.

Pakistan faced a complete blanket ban on YouTube and about 2 years or so, along with Googles renewed interest in the country as a possible market for online advertisements the trend has picked up again. However, he is not the only one to be called out with Adam Saleh making headlines for his Delta Air prank. The YouTuber was escorted off a plane for creating a ruckus but turned the video around on a different angle. This created outrage from the YouTube community, sparking a series of videos from fellow youtubers who called him out on a failed attempt to film and endanger people on the airplane.

The allegations against Shaam Idrees are of a similar claim. The Youtuber is accused of copying smaller youtubers work, stealing their ideas, using click bait videos to churn views and just being overall annoying. His relationship with his wife, “Froggy” is also a mystery, where some reports claim they have seperated but they still appear in videos together to answer back or react to the hate videos being made to address the allegations against them.

Froggy and Shaam Idress are also accused of cashing in “Punish A Muslim Day” by making clickbait titled video of a prank gone wrong only to change it to a different title later on. The duo have also exchanged a number of heated tweets with people sharing their opinions and have resorted to alleged Pakistani bashing.

Ducky bhai is a Pakistani Youtuber with around 300k followers who has released a slew of videos on his channel levelling the allegations against Shaam Idrees. Although he operates from inside Pakistan, he also makes other “meme” type videos. However, with No.1 on trending right on YouTube, he has called out Shaam Idrees for being fake and scripted.

His claims are that Shaam Idrees has banned certain words on his channels comment bar, that make it impossible for people to criticize or give an opinion about the quality of videos being produced. He also brings up the fact that the duo (Shaam & Froggy) have flagged smaller youtubers which has shut down their channels or taken down some of their videos. Drama is part of an online life. While the veil of anonymity enables a inconsequential life, trolling has its downside. Youtube is a huge video sharing platform with billions of videos being shared on it daily. Its only natural for the competition to get to you and you end up resorting to underhanded tactics to generate views and drive channel engagement.

The Challenger and accused raise significant points against each other, but to us its seems more a childrens quarrel being fought by grown men who could definitely use the time to create more engaging content than just diss tracks and spat videos. The challenger in his video brings up very plausible points, but towards the end the fact he starts to use “islam” and “hijab” as a means of throwing shade at the other party is off putting and uninteresting as a debatable point.

Some points that Shaam Idrees makes are valid as well such as “Pakistanis like to drag other Pakistanis down”. It could be a weak attempt to generate views because that equals money, but we feel the spat will die down eventually much like everything in Pakistan.