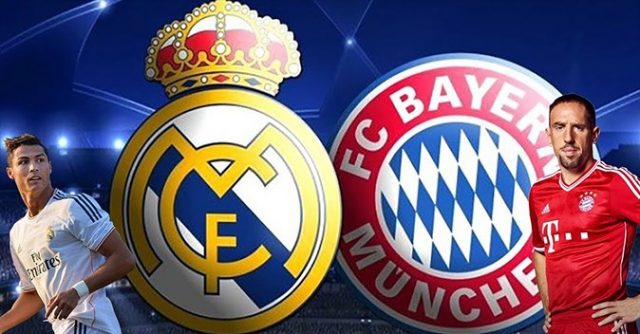 Bayern Munich and Real Madrid will meet for the 25th times in European competition, this will be the most played European Cup/Champions League fixture history match.

Bayern Munich has lost each of their last five games against Real Madrid in the Champions League with all of those coming in the knockout rounds. Real Madrid has won each of their last two Champions League games against Bayern at the Allianz Arena, with both coming in seasons in which they went to win the competition.

After a disappointing La Liga campaign, Real Madrid is looking to the Champions League to save their season. Real have won quarterfinal with the penalty of Ronaldo and qualified Semifinal to face German professional domestic club Bayern Munich.

Bayern Munich stands on top of the Bundes Liga standings table and it will be by no means a stress-free match for Real Madrid. Bayern Munich booked their place in semis with the win over Sevilla 2-1 in the quarters. Still, they are not looking comfortable with the clash of the semifinal. Bayern Munich has world’s best defensive line, and not easy for Ronaldo to break the defense of their encounter-part. Real Madrid midfielder might face difficulties in the start but their strong integration will work to slow down the pace of their opponent.

Real Madrid left-back David Alaba and Marcelo are arguably the two best in the world. The Brazilian professional is instrumental in Real Madrid’s Champions League matches. His combination with Ronaldo will be the key strength for their winning against Bayern Munich.

The star player of Real Madrid Ronaldo has picked up 24 goals in 15 games of the league. Ronaldo is playing for a new position as a central striker but his position has not changed his potent in front of goal. Bayern Munich striker Robert Lewandowski has scored 28 goals in 28 appearances in the league. While the Polish professional striker is becoming unstoppable from scoring goal. The Bayern Munich will play beside him to make a chance for him.

Thiago Alcantara of Bayern Munich considered next Xavi for his fantastic eye for a pass and in superb with the ball at his feet. His skill and combination with Robert might bring prowess in front of goal.

There is a strong anticipation of the tie, but this is football we can expect anything from it.