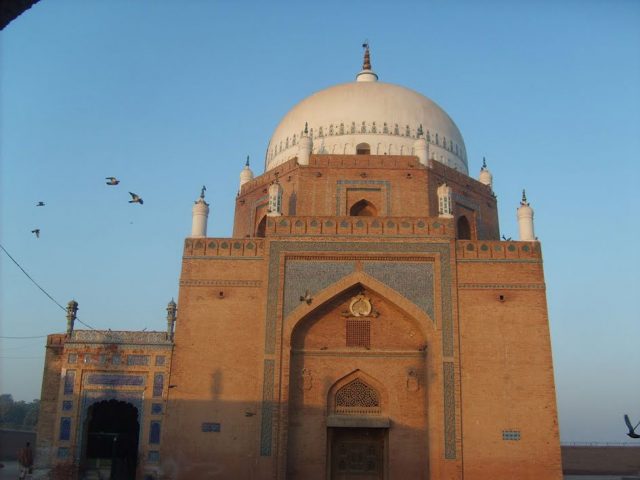 Shrines of different Sufis and Saints in Pakistan do not only highlight the fact that Sufis and Saints once played a dominant role within the socio-religious life of Subcontinent in general and Pakistan in particular, but they also form interesting sites of religious and cultural activities for the followers and visitors. There are many Sufi shrines in Pakistan, which, behind their religious attires, possess a body with a heart that beats with the rhymes of love and affection, and with a soul that dances with the music of spiritualism, pluralism, and tolerance. No wonder that the religious extremists have always targeted these shrines.

Nevertheless, the devotees of these shrines have kept their love intact; they keep on visiting them and keep on adding color, culture, and continuity to them.

15 of the most visited shrines of Pakistan are given below: This 1400-years-old shrine is of the famous saint, Abdullah Shah Ghazi, who was the great-grandson of Prophet Muhammad (PBUH) through the lineage of Hassan (AS) Ibne Ali (AS).

The shrine is located near Clifton, Karachi and each year thousands of devotees visit the shrine.

In 2010, the shrine was attacked by two suicide bombers that resulted in the death of around 10 people and injury to 60 others. The captivating shrine of Lal Shahbaz Qalandar, the 13th century Sufi – equally respected by people of all religions, was constructed on the order of Shah Tughluq. It is situated in Sehwan Sharif, Sindh. Every year, around one million people visit the shrine.

In February 2017, the shrine was attacked by a suicide bomber, belonging to ISIL-Khorasan. The attack resulted in the death of around 90 people and injury to more than 300 others. The Shrine (Darbar) of Baha-ud-Din Zikriya (1170 – 1267), Sufi of Suharwardiyya order, rests in north-eastern part of ancient fort of Multan. Each year, during the Urs of Baha-ud-Din Zakaria, many people from different parts of the country visit the shrine. This shrine is the resting place of Shaykh Syed Ali al-Hujwiri, the 11th-century mystic, and theologian who contributed largely to the spread of Islam in Subcontinent. The shrine lies in Lahore and is the largest shrine in Pakistan, considering shrine complex and the number of visitors.

This shrine was also attacked by two suicide bombers in July 2010 that killed at least 45 people and injured several others. The Tomb of Bibi Jawindi was constructed by Iranian prince, Dilshad for great-granddaughter of the Sufi saint Jahanivyan Jahangasht, around 1493. It is situated in Uch Sharif and is included in the tentative list of the UNESCO’s World Heritage Sites. This octagonal shrine, with world’s second largest mausoleum, remembers Sheik Rukn-ud-Din Abul Fath who lived during the 14th century and is considered as one of the most eminent of Sufi saints in Multan. This alluring shrine is of Khwaja Ghulam Farid, the renowned Punjabi Sufi poet of the 19th century who had a mastery of several languages and belonged to Chishti-Nizami Sufi order. The shrine is in Mithankot, Punjab. The eminent shrine of Sachal Sarmast – the Sufi poet who wrote poetry in seven languages, particularly in Sindhi – is in Khairpur, Sindh. As the meaning of his pen-name (Ecstatic Saint of Truth) suggests, his poetry is considered as the ‘ultimate truth’ by many readers. His shrine is always crowded with devotees, followers, and visitors. The shrine of the greatest Sindhi Sufi poet, Shah Abdul Latif Bhittai (1689 – 1752), is situated in Hyderabad. Bhittai’s poetry, translated into many languages, is equated with that of the Persian poet Rumi. His shrine is always full of his aficionados.

Situated near the Shalimar Gardens, Lahore, the shrine of Shah Hussain – the famous 16th century Punjabi Sufi poet, is the site for ‘Mela Chiraghan’ every year, which is both a spiritual and cultural festival that attracts thousands of people. This shrine is claimed to be of Shah Shams Tabrizi, a well-known Sufi who lived during 12th and 13th century. According to some estimates, the shrine was first built in 1330 AD. His Urs is celebrated every year in June, which attracts thousands of devotees. This shrine, in Qasur, is the resting place of the celebrated Sufi poet of 17th century, Bulleh Shah, whose poetry has been transformed into qawwalis and songs that have become very popular. This shrine is visited by many people throughout the year. The shrine of Shah Abdul Latif Kazmi, also known as Bari Imam, is in the capital, Islamabad. Bari Imam was 17th century Sufi from Punjab. His shrine was originally built by Mughal Emperor Aurangzeb. People in large numbers, generally from different parts of the country and particularly from Punjab visit the shrine during the Urs.

This shrine was also attacked by extremists in 2005. As the result of the attack, twenty people were killed and nearly 100 others were injured. The shrine of Rahman Baba – Abdur Rahman Mohmand – is in Peshawar. The shrine is frequented each day by people in large numbers. Rahman Baba was a 17th century Sufi Dervish and poet, who wrote poetry in Pashto.

Rahman Baba’s shrine was also attacked by extremist militants in 2009. The attack killed more than 100 people and injured many others. Situated in Khuzdar, Balochistan, the Shrine of Syed Bilawal Shah Noorani is the center of attraction for thousands of devotees. Shah Noorani was a mystic saint, believed to be the descendant of Ali (AS) Ibn Abi Talib.

Shah Noorani’s shrine was attacked by Islamic State militants in November 2016. As a result of the attack, more than 52 people were killed and many others were injured.