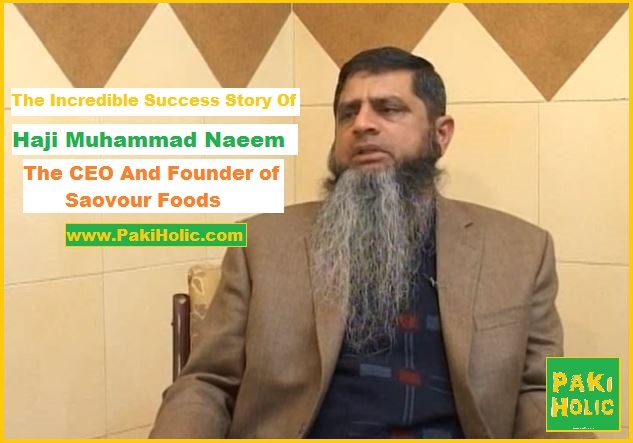 You might have heard many people in Pakistan complain about poverty and the lack of opportunities in the country. However, there are some people who instead of complaining take the initiative and change their lives, despite all odds. One such name is that of Haji Muhammad Naeem. He is the owner of Savour Foods, a household name in Islamabad and Rawalpindi. This fast food restaurant famous for its delicious ‘pulao kabab’ has become the identity of the twin cities.

Here is how Haji Muhammad Naeem and his family built this ‘Pulao Kabab’ empire from nothing to the biggest food outlet in the twin cities.

How it all started – The Humble Beginnings

Haji Muhammad Naeem belongs from a religious and landlord family of Gojra, Toba Tek Singh. He started the first Savour Foods restaurant with the support of his family in the year 1988. It was a small restaurant in a small shop near Gordon College, Rawalpindi. The restaurant comprised of a very small kitchen and a sitting area with about 20 chairs in it. The things were tough at that time. The shop was opened in a residential area and there was not much hustle and bustle in the area at that time.

In the beginning the things were not so good for Savour Foods. The profits were quite small and the space was very limited. But, despite all difficulties, Savour Foods always maintained its standard. Special attention was given to ensure the cleanliness and the quality of the food served to the customers. Here, Haji Muhammad Naeem explains that perseverance was of vital importance. Unlike many people who keep switching from one business to another, he kept on working hard on Savour foods. He kept on re-investing the profits in the same business.

The second branch of Savour Foods was opened in 2001 in Bagh Sardaran area of Rawalpindi.

The fourth and the biggest branch of Savour Foods was opened on 24th March 2005 in Blue Area, Islamabad. Savour Foods purchased the land in this main business area of Islamabad for a huge sum of money. However, it proved to be an excellent investment in the later years.

The fifth branch of Savour Foods was also opened in the year 2005. It was inaugurated on 14th August 2005. It is located in the Cricket Stadium Food Street, Double Road, Rawalpindi.

In 2002, due to the high demand of high quality rice, Savour Foods built its own rice production plant. The plant was built in Gujranwala district and it ensures that the rice demand of the Savour Foods restaurants is met on time. In addition to meeting the demands of its own restaurants, this rice plant also produces rice for the Savour Rice brand for sale to general public.

Savour Foods built a milk plant as well in 2002. The plant is located in Sargodha district. Fresh milk is collected from the nearby villages. This milk is then chilled and then it is transported to the different Savour Food outlets, where it is used in the making of products like ‘kheer’, and ‘ice-cream’.

Haji Muhammad Naeem the CEO and Founder of Savour Foods tells the recipe for success. He says that affordable prices and high quality are the key to success in food industry. According to him Savour Foods has been able to maintain low prices by removing the middle man from its purchases. The company purchases, beef, chicken, milk, and rice directly from the producers. In addition, Savour Foods does not have to pay the hefty rents every month for its restaurants. Almost all the properties are owned by Savour Foods.

The Problems Being Faced by Savour Foods

The CEO and Founder of Savour Foods Haji Muhammad Naeem says that some of the major problems that Savour Foods has to deal with are shortage of Sui Gas, regular load-shedding of electricity, and dealing with different political regimes that come into power. However, he says that difficulties and challenges are a part of doing business anywhere in the world. And successful businessmen are able to maneuver around these difficulties and take their business forward.

Savour Foods has done a lot of humanitarian work as well. The food giant has helped the country in the times of need. Savour Foods did a lot of work for flood victims, for earthquake victims in Muzaffarabad, and for internally displaced people as a result of operation Zarb e Azab.

Large businesses and government departments often take the services of Savour foods in order to cater to the needs of large events.

Haji Muhammad Naeem has plan of expanding Savour Foods to other cities of Pakistan like Lahore and Karachi. He is determined to take the business forward and make it a food icon of Pakistan. He also has plans of taking the business in other countries of the world. The delicious ‘pulao kabab’ of Savour Foods already has quite a lot of demand among overseas Pakistanis.

Haji Muhammad Naeem has shown that with hard work, passion and perseverance, one can succeed in business in Pakistan. What do you guys have to say about this incredible success story of Haji Muhammad Naeem? Do let us know in the comment’s section below. Also, keep following Pakiholic.com, we will be bringing you more such stories in future.