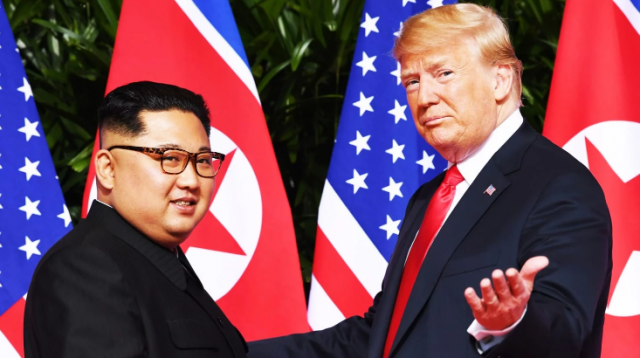 President Donald Trump and Kim Jong took a historic step on Tuesday, becoming the first leaders to bring U.S. and North Korea together under one agreement. The proceedings took place with them shaking hands and came to negotiations to end this decades long nuclear conflict between both the states.

The venue for this meeting was in Singapore, both the leaders, Trump and Kim made their presence on global media present at the venue. Came together and shook hands in front of the media.

The purpose is to have detailed talks about ways to end the nuclear stand-off between both the states, and how they can come to a productive solution that is favor of both the states. Only a couple of months ago, both the leaders were exchanging harsh comments on each other. Within a few months, both the hostile leader changed their tone and are now coming under a single agreement which could end the risks of a potential nuclear war between both the states.

In President Trump’s tweets, he indicated that summit preparations were “going well and quickly”.

“We will all know soon whether or not a real deal, unlike those of the past, can happen,” he tweeted.

Pointing at the recent release of three American hostages and Pyongyang´s pledge to refrain from further nuclear or missile tests, Trump charged that “these pundits, who have called me wrong from the beginning, have nothing else they can say!”

“We will be fine!” he tweeted.

Reuters, Russian Media TV said: “Trump and Kim were confident but body language revealed nerves at first meeting. In their first moments of meeting each other, US President Donald Trump and North Korean leader Kim Jong Un both sought to project a sense of command as they began a historic summit in Singapore, according to a body language expert.”

Managing Director of Singapore-headquartered Influence Solutions, said the first 60 seconds showed both leaders seeking to take charge in their encounter. These observations were taken after the close inspection of both the leader during the brief appearance on the International Media.

“Their handshake seems to be between peers,” she said.

“Trump seemed to be very aware of this, that he needed to up the stakes and be seen that he is the leader.”