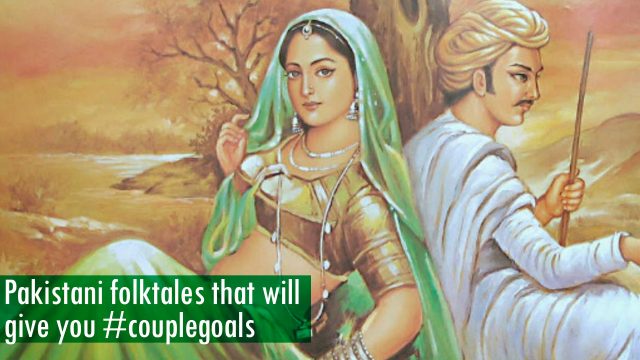 Although Pakistani folklore has been passed down the generations through just by word of mouth and the method of storytelling, they have remained an integral part of our culture and traditional history. It is interesting to note though while western folk lore focuses more on a “happy” ending, our stories were fraught with drama, suspense, betrayal, anguish and romanticism that has had a permanent impact into the love lives of the people of the region till now. With Valentine’s Day right around the corner, we feel it’s the right time to rekindle the romantic in you with a revisit to some of the most popular Pakistani folk tales

Perhaps the most famed love story that resounds in the lands of the subcontinent is of the love affair of Anarkali & Jahangir. This Mughal era inspired fling still shakes the history books of the rage of Akbar, when he finds out that his son, Jahangir, is dating a courtesan.

Anarkali, who historians debate real name was Shiraf-un-Nisa, was called so based on her beauty that was reminiscent of a freshly blossomed pomegranate in a spring garden. After Jahangir gets defeated by his father, she has no choice than to renounce her love for him and be sentenced to be bricked alive. Legends say that the scene of her renouncing made the king so emotional, he constructed a secret passage way which Anarkali used to escape and never return. Heer Ranjha is a popular Punjabi folklore, whose tales have been immortalized even by the likes of Shah Abdul Latif Bhitai. Ranjha is the favorite son of a farmer but is the youngest of four brothers who gets exiled upon his death and travels to Heer’s village where he is instantly smitten by the beauty. Ranjha seeks employment with her father as a cattle herder and at the same time woes her by his flute playing skills. They remained in an affair until they were discovered by Heer’s uncle, Kaido. The family of Heer refused to marry her to Ranjha, and he in his heartbroken state, travelled the desert and became a “Jogi”.

Travelling back to Heer, he manages to persuade her parents for marriage, but Heer’s uncle decides to poison the wedding food as revenge. Both lovers eventually die next to each as Ranjha watches Heer die of the poison and partakes of it himself to be together with her in death if not in the living. Sohni was a daughter of pottery maker, Toolha. At the time, Gujarat, on the river Chenab, was on the trade route between Bukhara and Delhi. Sohni would be responsible for decorating freshly moulded earthen ware items with her skill of drawing floral patterns and setting them up for sale. Izzat Baig, a trader from Uzbekistan, sees upon her beauty and manages to pursue a relationship even letting go of his wealth as a rich trader to become a cattle herder. However, Sohni’s father marries her off to another potter who she despises.

In order to be with her one true love, Sohni swims across the river using an earthen ware pot to keep her afloat. However, one unfaithful night, her pot is replaced by a unbaked one by her sister who spied on her and she drowns in the river with Mahiwal following suit trying to save her from the river’s wild currents. The story of Rano & Momal is a 14th Century Sindhi Rajisthani folktale. The King of Umerkot’s along with his ministers which included Rano as well were famed to be big hunting enthusiasts, so much so they would cross border in attempts to get game. One such time, they found a vagrant traveler who told them how he had lost all he had to the name of Momal, a legendary woman of beauty. He retold of his woes at the hands of the princess and her handmaidens (some historians argue they were actually her sisters). Intrigued, the king and his entourage marched to her palace which was fabled to be situated south east of Umerkot. Of the entourage, only Rano cleared all obstacles and puzzles set forth and managed to win the right to be Momal’s consort but the King grew jealous and forbade Rano to meet Momal.

Being a king friend, Rano had no choice but to obey but eventually his love for Momal grew unbearable and he would meet secretly and was eventually caught. The King threw him in the dungeons but due to their friendship, released him on the condition he never meet Momal again. During this time, Momal who grew weary and love torn with the absence of Rano asked one of her servants (or sisters) to wear clothes similar to Rano and sleep next to her to console her. When Rano managed to get to her palace he saw the same scene and disgusted left and all but that remained was his cane which when Momal saw, she knew what had transpired.

Momal in order to win him over disguised herself as a man and travelled to Umerkot. Upon hearing her side of the story, too adamant was Rano’s pride to forgive where upon she threw herself into a burning fire soon followed by Rano and the lover’s perished in the dancing desire of the lust of their love.

Sometimes regarded as the “Romeo & Juliet” of Pashto folktales, this is a story of a young huntsmen falling in love with the beautiful Sheherbano of Kamachar Hills. While their fiery love grew, Yousaf Khan’s cousins however overthrew his father and took control of the lands rendering him homeless. They chased him out of the region, where he sought refuge in the area now post partition is known as India.

While his cousins were forcing Sheherbano to marry another man, Yousaf Khan got wind of the news and rushed to his beloved’s aide. Fortunately he arrived in time to stop the marriage and begin a journey anew with his new bride with a truce among his cousins. One day, he gets invited to hunting raid and there his cousins betray him resulting in Sheherbano throwing herself off the cliff where they had first met.

Although there are many more such folktales among our region, these are our picks for right now. These collections of stories can be found by authors such as Waris Shah (Punjabi), and Shah Abdul Latif Bhitai’s “Shah Jo Risalo”, a collection of seven tales of woe and love featuring mostly Sindhi and its contemporary cultures folktales.