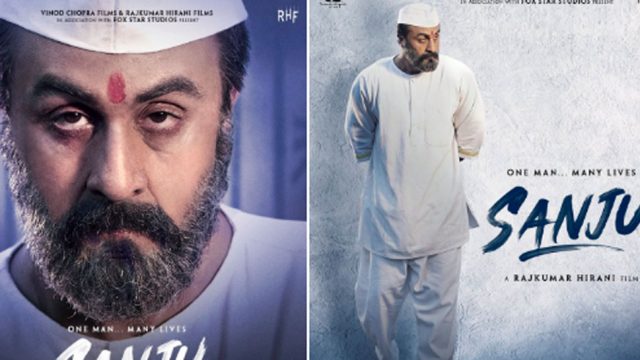 Apparently Ranbir Kapoor is the chosen one for playing the roll of Sanjay dada and he is pulling it off better than many had hoped. It seems like Ranbir Kapoor has mastered the art of emulating legendary actor Sanjay Dutt in his upcoming film ‘Sanju’ perfectly.

The film is helmed by Rajkumar Hirani, who has been on a poster unveiling each of Ranbir’s looks recreating Dutt. The latest one happens to be from the time when Sanju baba was in Yerwada Jail, Pune. Ranbir Kapoor has transformed himself so much so that in the teaser which was released a few days back, it becomes hard to make any difference between the reel and the real Sanjay Dutt.

The resemblance of Ranbir Kapoor and Sanjay Dutt in the posters has got fans even more excited about ‘Sanju’. Filmmaker Rajkumar Hirani, who has the fans excited by regularly unveiling the posters of the film.

Rajkumar Hirani has been continually dropping updates from his film and this has helped to create hype around the film.

Filmmaker Rajkumar Hirani recently shared on Twitter a new poster of the film, in which Ranbir looks like a spitting image of Sanjay Dutt, during the actor’s time spent in jail in 2013.

With movies like PK and Munna bhai MBBS on his resume, Mr Hirani surely aspires to hit the jackpot ones again with the release of the year’s most anticipated film. Based on the life of Sanjay Dutt, Sanju will track the actor’s journey across various ups and downs, his struggle as well as the time he once reigned in Bollywood.

The poster is a zoomed-in version of Ranbir and showcases him projecting a serious, contemplative mood.

‘Sanju’ is slated to release on June 29.

This is an excellent first of its kind plan for the movie and highly enticipated, specially by the fans of Kapoors and Mr.Sanjay Dutt. The excitement is flowing, hopefully it will match upto its expectations.