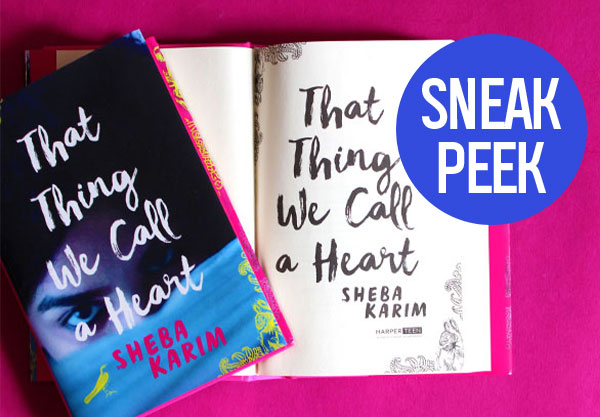 Despite having reached the legally-allowed-to-drink-in-many-countries age of 21, I am still a huge fan of young adult novels especially the ones featuring high school love stories.

I recently got my hands on this book called “That Thing We Call A Heart” by Sheba Karim. To be honest, I wasn’t expecting much from it.

I was looking forward to yet another romance novel where the girl is absolutely smitten by her prince charming, they fall in love and live happily ever after but boyy, was I in for a surprise. It is a sensational book about love, friendship, heartbreak, history, religion and above all, growing up in today’s world.

This piece of writing doesn’t just explore romantic love, but also portrays the power and importance of friendship through the dynamic the two friends, Farah and Shabnam, shared.

What I reeeeeally liked about this book is that Sheba, through her writing, proves that there’s no one or right way of being a Muslim. Farah, a feminist by nature and a huge lover/follower of punk music, wears a hijab and is proud of it. She is described in the novel like this. Shabnam, the protagonist, on the other hand is unsure of whether she even considers herself as a Muslim. She defies conventional Islam despite her family (or at least her mother) being extremely religious and conservative.

My favorite part, however, is when Farah starts wearing a hijab and is approached a random guy asking, “why don’t Muslims ask the terrorists to stop?”.

Ashish asked, “I don’t understand why the Muslims don’t tell the terrorists to stop?”

For Farah, this was some kind of breaking point, the end of nice.
She clapped her hand over her mouth. “Oh. My. God. You are so right! Hold on—” She took out her phone and pretended to dial. “Hello, Terrorists? Hi! Can you please stop blowing stuff up, it’s becoming a real drag. You will stop? No more beheadings, no more suicide bombs? Awesome, thanks! What? Can I stop US hegemony? Sure, no problem, I’ll make sure it’s over by tomorrow. All right, later! Holy shit, Ashish, thanks to you I just saved the world.”

The book sends out a strong message to the non-Muslims that the Islamic community covers a diverse range of people; all of them have different beliefs and habits and thus one cannot generalize the whole ummah.

The book also discusses the partition of 1947 from an unbiased angle and how it’s something that’s not being talked enough about despite being one of the biggest migrations in history.

The characters and their narration is what makes this book seem so realistic and relatable. It was refreshing to see such casual & open discussions about love, sex, body odor, religion, poetry etc.