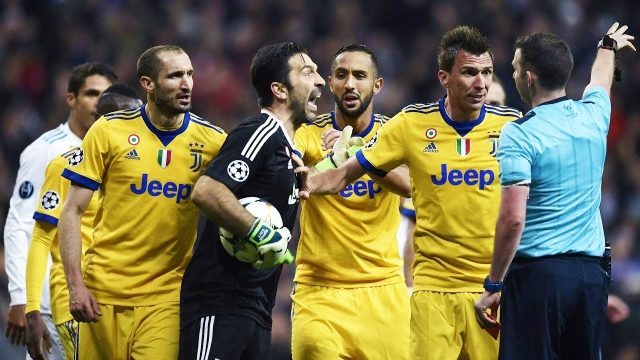 Gianluigi Buffon, Juventus’s goalkeeper reaction was remarkable during the last minute of the match. It was one of the most dramatic events in his career. He was shown a red card for his aggressive protest on the penalty of Cristiano Ronaldo that allowed defending team to advance to the semifinals of the competition.

Buffon left the field under the applause of the Madrid crowd, the top scorer of Real Madrid Ronaldo had to wait for several minutes to take the penalty, while the teammates of Buffon surrounded the referee and argued for about the rejection. Ronaldo hit the persevering shot past the Juventus replacement keeper, Wojciech Szczesny, and took off his shirt running towards the corner flag to celebrate. Ronaldo winning penalty was his 120th goal in the competition and made him the first player in 11 consecutive Champions League games.

The penalty was enough to ensure a 4-3 aggregate victory for Real Madrid over their Italian rival Juventus to keep alive their dream of a third consecutive Champions League trophy. On the other hand, for Buffon and his teammates was a heartbreaking end to a game and exit from Champions League.

Juventus team after arriving at the Bernabéu, Buffon, 40 said during the news conference on Tuesday that the idea of ending his Champions League career “was not a drama.” In fact, he added, “If that turned out to be the case, I would have signed as a child to be able to play my last game in the Bernabéu against Real Madrid.” Juventus started the game with the score of Sami Khedira, carved open the Spanish defense with a cross for the unmarked Mario Mandzukic, who planted a firm header past Real Madrid goalkeeper Keylor Navas. The goal threatened the Real Madrid, midfielders struggle to keep possession on the ball and to slow down the pace of Juventus strikers. The lack of cohesion among midfielders of Real Madrid gave another similar chance to Mandzukic to score another goal after 37 minutes of the match.

The crowd chanted “Juve, Juve” from the top corner of the Stadium, occupied by the Italian club fans pressurized the Real Madrid goalkeeper, Navas, to blunder during the second half of the match. Navas dropped the cross from Costa and the ball went at the feet of Blaise Matuidi of Juventus, who slotted the ball into the net. The goals equalized the aggregate and the dream of winning the match was at risk for Real Madrid. But then came the last-minute push on Lucas Vázquez that offered Ronaldo the chance to redeem himself and qualify Madrid with a textbook penalty kick.