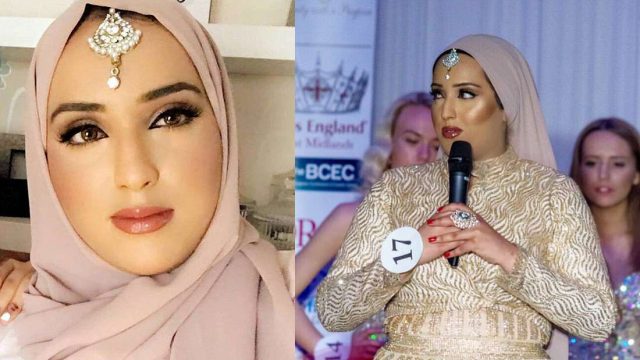 Maria Mehmood is a 20 years old student of Psychology, aspiring to change the socially constructed image of Muslims in the West. She happens to be a student of psychology, based in Birmingham. As a part of Miss England competition, the young model is the first ever participant to wear a Hijab and that too someone who made it to the semi-finals.

“Muslims are associated with negative things like terrorism. I’m determined to do my bit to challenge those views,” Maria told The Mirror.

“It’s pretty rare for a Muslim woman to be in a beauty pageant but there’s nothing to stop us entering. I entered Miss Birmingham and the organizers were delighted to have a hijab-wearing Muslim in the competition. They fast-tracked me through to the final where I competed against 30 girls and came second. I couldn’t believe it,” she said.

Even though her friends and family are constantly supporting her, she believes that the Muslim community at large is going to backlash her decision.

In an interview, she expressed:”When I came runner-up, they were delighted for me. I’ve got three brothers and they’ve also been so good. Most people have been supportive. There have been a few negative comments and I’m fully expecting some criticism from old-timers and conservatives. But what I’m doing is empowering for Muslim women. I’m anticipating most people will back me,” she added.

Interestingly, when asked about the swimmear round, she replied, “Obviously, “I’m not going to parade on stage in a bikini as that is going against my religion and beliefs. I’ll wear a burkini.”

The competition of Miss England semi-final would be held in Newark, Notts, in July. If Maria wins this title, she would be competing in the following Miss World Contest.

Mehmood also added: “In today’s society, we [Muslims] are not exactly loved because what is happening in the world.”

Looking forward to the finals! Send us your thoughts about this 😀