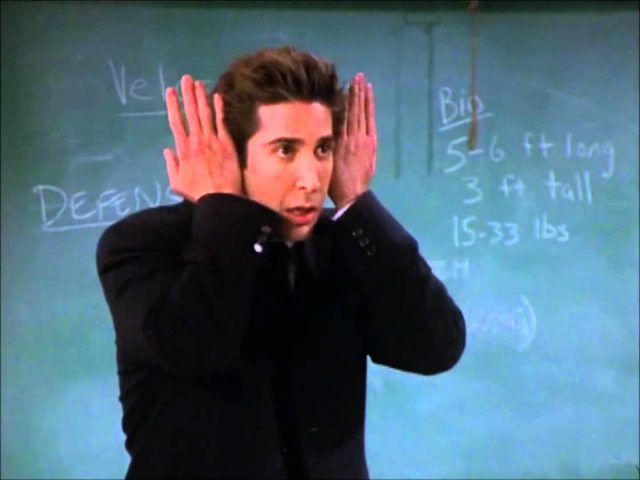 I have binge-watched Friends a couple of times but it was only this time around that I realized what a class-A jerk Ross Gellar is and I just can’t unsee it now. I mean suuuure, I used to fancy Ross’ and Rachel’s relationship when I was young but over the years, I have begun to see him for who he really is and I can’t help but get mad at the writers for the couple’s reunion when Rachel clearly deserved so much better than him.

I mean we are talking about a guy who was head over heels in love with Rachel but couldn’t truly value her when he finally got her because well, he’s Ross.

Here are some instances where I just couldn’t stand him.

1. When he gets upset at Ben playing with a Barbie like.. what is the big deal, dude?

2. When he comes back from China with Julie like weren’t you in love with Rachel two days ago?

3. Then when he breaks up with her because he realizes that he still has feelings for Rachel. Um, what, is this a joke to you?

4. When he pretends to be a masseur because he thinks that his client would be an attractive women.

5. When he ditches his date at a restaurant to be with his wife like is that a way to treat a woman, huh?

6. When he humiliates and insults Rachel and his other friends because they were taking a lot of time to get ready for his speech. 7. When he gets jealous of Rachel’s new boss Mark and starts being super possessive of her due to his insecurity.

8. When he complains about Rachel not having enough time for him because of her new job like hello? She is trying to make something of herself so shut up.

9. And when he gives her a choice between him and her job and expects her to give up her job in order to be with him like ughhh.

10. When he embarrasses her by sending ridiculous gifts to her office. 11. When he cheats on Rachel while they were on a break and refuses to admit his mistake.

12. When he takes Rachel’s name at his wedding with Emily.

13. When he refuses to divorce Rachel after they get drunk-married in Vegas because he didn’t want another divorce on his plate.

14. When he can’t wrap his head around the concept of a manny like ughh.

15. When he dates his student like please no, NO NO NO.

17. When he thinks too highly of himself just because he has a doctorate degree.

There are so many other occasions where Ross proves to be the most annoying, obsessive and condescending man out there but I gotta stop here.