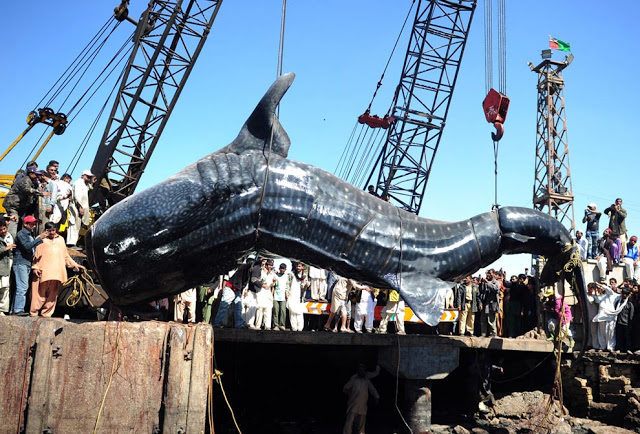 Fishing is one of the most popular hobbies in the world. And we can all relate to at least one incidence when we tried catching a fish. However, many of the newbies fail to catch any fish because of lack of experience. In Pakistan, fishing is a proper industry that contributes a huge amount of money to the economy of the country. Fishing is not only a popular source of earning among those who live along the coast line, but it is also a very popular source of earning for those living near the rivers and dams in Pakistan.

You might have seen some amazing large fish being caught by the fishermen of western countries in various Discovery and National Geographic channel programs. However, you might not be aware that often the Pakistani fishermen and hobbyists get to capture some super sized fish. We have compiled a list of 7 of the largest fish caught in Pakistan. Here they are.

7 – This lucky guys caught this huge fish and he surely looks happy and proud about it. 6 – It is not everyday that you get to catch and pose with such giant sea creatures. 5 – Woah! This one looks taller than the person holding it. 4 – A great trophy to hold and showcase to your friends and family. 3 – Apparently these guys caught this monster, brought it home and then came to know of its true size. And then they decided to have some pictures with it.

2 – Moving on to some big boys. This catch is too big for anyone to hold. This giant whale shark was captures somewhere near the Karachi shore and then it needed huge trucks to be transported. 1 – How can we forget the biggest catch in the history of Pakistan. This giant Whale Shark was captured in Pakistan in 2012. It’s total length was around 40 feet. Cranes had to be used to lift it became a tourist attraction after being caught. People came from far to take pictures with this big fish. Don’t forget to share this article with your friends and family to amaze them with the size of these giant fish caught in Pakistan.